Frankfurt, Germany, 1997 and a new Mercedes-Benz is seen.  New as it was a front-wheel drive, a very unusual and different departure for Mercedes-Benz.  New in it’s shape, tall and short body.  New in the market that the car was aimed at. 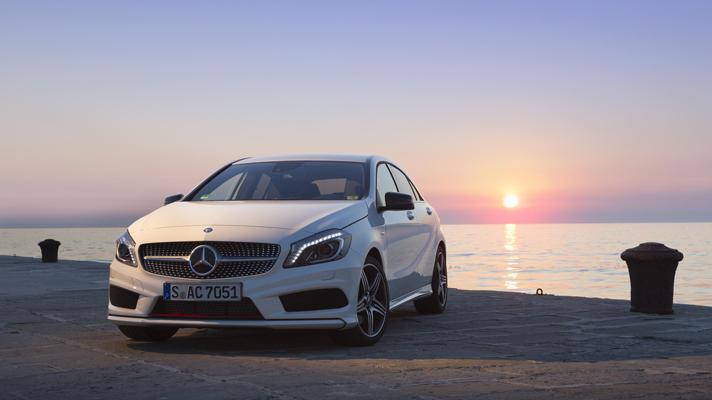 Mercedes-Benz was entering into the premium hatchback for the first time.  So a car with a snub-nose, upright stance and a very innovative sandwich platform, that would allow the engine and drive-train to pass under the driver and passenger’s feet was launched at that show in Frankfurt.

The idea was to offer an entry level Mercedes-Benz, something smaller that would allow a different clientele to enter the world of Mercedes-Benz.  A steeping stone allowing people a way to work their way up through the range.

Mercedes-Benz did not get everything right.  The A-Class famously failed the “Elk Test”, (a test that is performed to determine how well a vehicle evades a suddenly appearing obstacle, named after the Swedish evasive manoeuvrings test, which mimicked the sudden appearance of the elk on Swedish roads), which led to the recall of over 2,000 cars.

The A-Class also was felt by some to be too up and down and too cumbersome and not as sporty as some of the small hatchbacks in the market at the time.  The price was not exactly enticing.  But over 1.5 million sales in the ensuing 15 years was not bad, by anyone’s standards.

There was a facelift and then in 2004 a new generation was launched, better looking with upgraded body strength and more airbags and more engine options, and the change in the shape was greeted with an upswing in sales.

So far, so good.  Then in 2012, the third generation was launched.  With Mercedes-Benz revealing anew A-Class with a radical change from the old shape.

Why?  Well it seems that Mercedes-Benz has been looking at the current market trends and it’s own customers and brought out a new shape.

The new car follows in the trend of the BMW’s 1-Series and the Audi A3, and I personally think that that is a huge shame.  I liked the old shape, I even liked the old, old shape (I still own one), but Mercedes-Benz have shaped the new A-Class in-line with their current design ethos, something that works for most of the range, with the exception being the CLS, but more of that another time.

This means that the new A-Class looks like the BMW 1-Series and that is something that detracts from the differential between the two brands.

Having driven the car, I can say that the feel is that of a typical modern Mercedes-Benz, solid, reliable with clean lines and cockpit that is follows the new design ethos that the whole range is immersed in.

I am sure that the idea of a stepping stone into the Mercedes-Benz family is still being pursued by the company but the price tag is a little high but this does mean that the upgrade to the larger classes should hurt less!

Only time will tell if this new shape and upgraded interior will do as well as the old shape but the initial sales are looking good.  Watch this space to see how the new “baby” of the Mercedes-Benz family gets on.