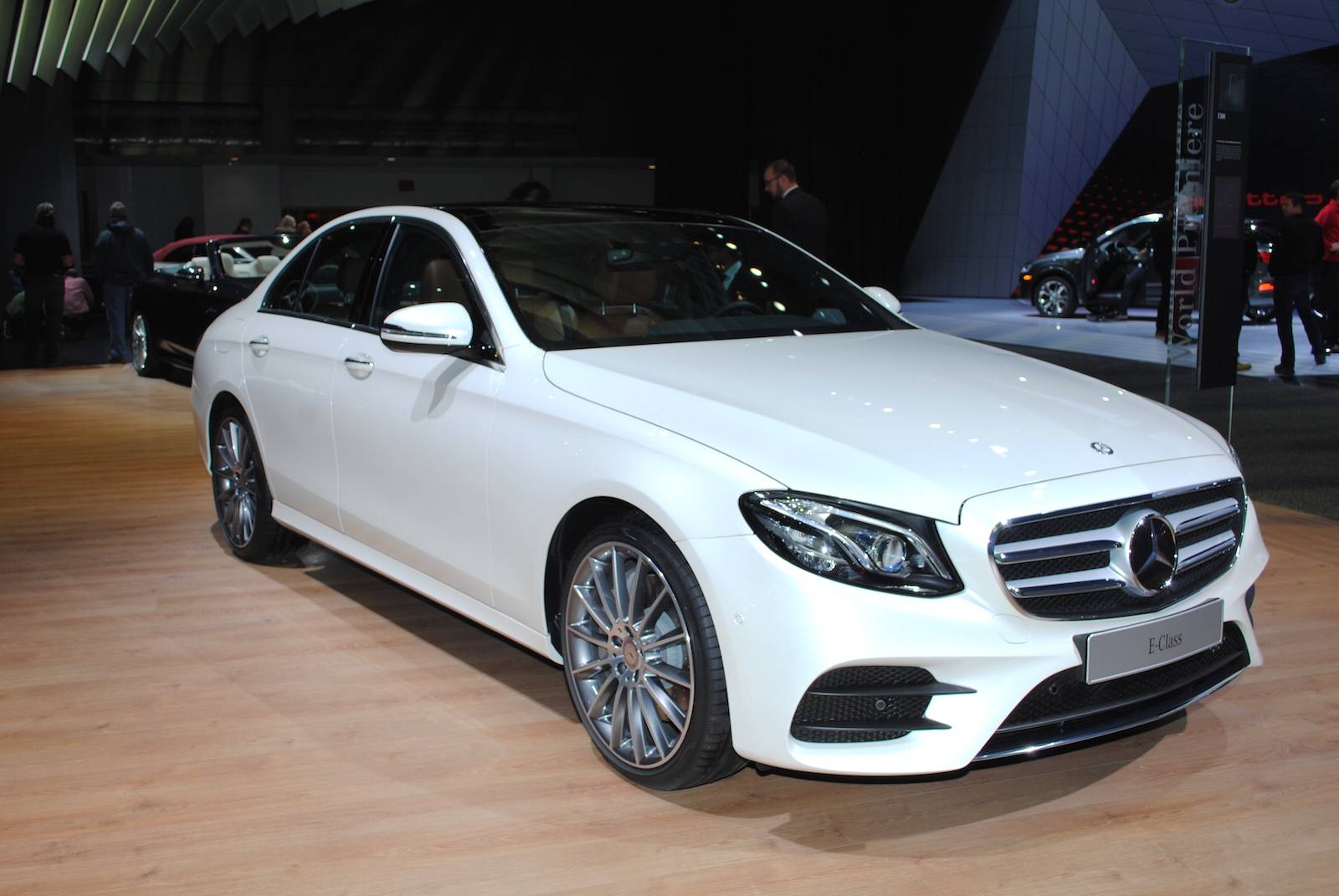 The new E-Class adopts a mini S-Class look, with a bold grille and oversized Mercedes badge. You’ll find the familiar LED headlights and a coupé-like roofline, too, as well as a short front overhang. The fifth-generation saloon is 43mm longer than the outgoing model overall, with an extra 65mm added to the wheelbase for increased passenger space.

]The Mercedes E-Class is one of the most important new cars of 2016, so we headed to the firm’s HQ in Stuttgart to see if the latest model has the potential to top the super-competitive executive class. Drummond Jacoy, head of overall vehicle design for the E-Class, showed us around the new rival to the BMW 5 Series.

One of the main objectives was to have this coupé-like exterior with wide shoulders, but to keep the interior space, Jacoy told us. “If you look at all luxury cars, that’s a very big part of the proportions. Then the long bonnet, short overhangs, long wheelbase and cab towards the back give you a luxurious stance that looks dynamic.

The new E-Class is practical as well as pretty, because it has a 540-litre boot – identical to the Jaguar XF’s. If that’s not enough for you, Jacoy told us that there will be an Estate version that will be more svelte than the current model.

he interior is another step forward for Mercedes. The infotainment system is more advanced than that in the S-Class, and there are touch-sensitive buttons on the steering wheel to control it. Customers will be able to add the optional Drive Pilot system to their car, which takes cruise control to the next level.

The new E-Class certainly has plenty of impressive equipment on board, but that’s reflected in the price. The range starts at £35,935, which is nearly £1,400 more than the equivalent Jaguar XF costs. 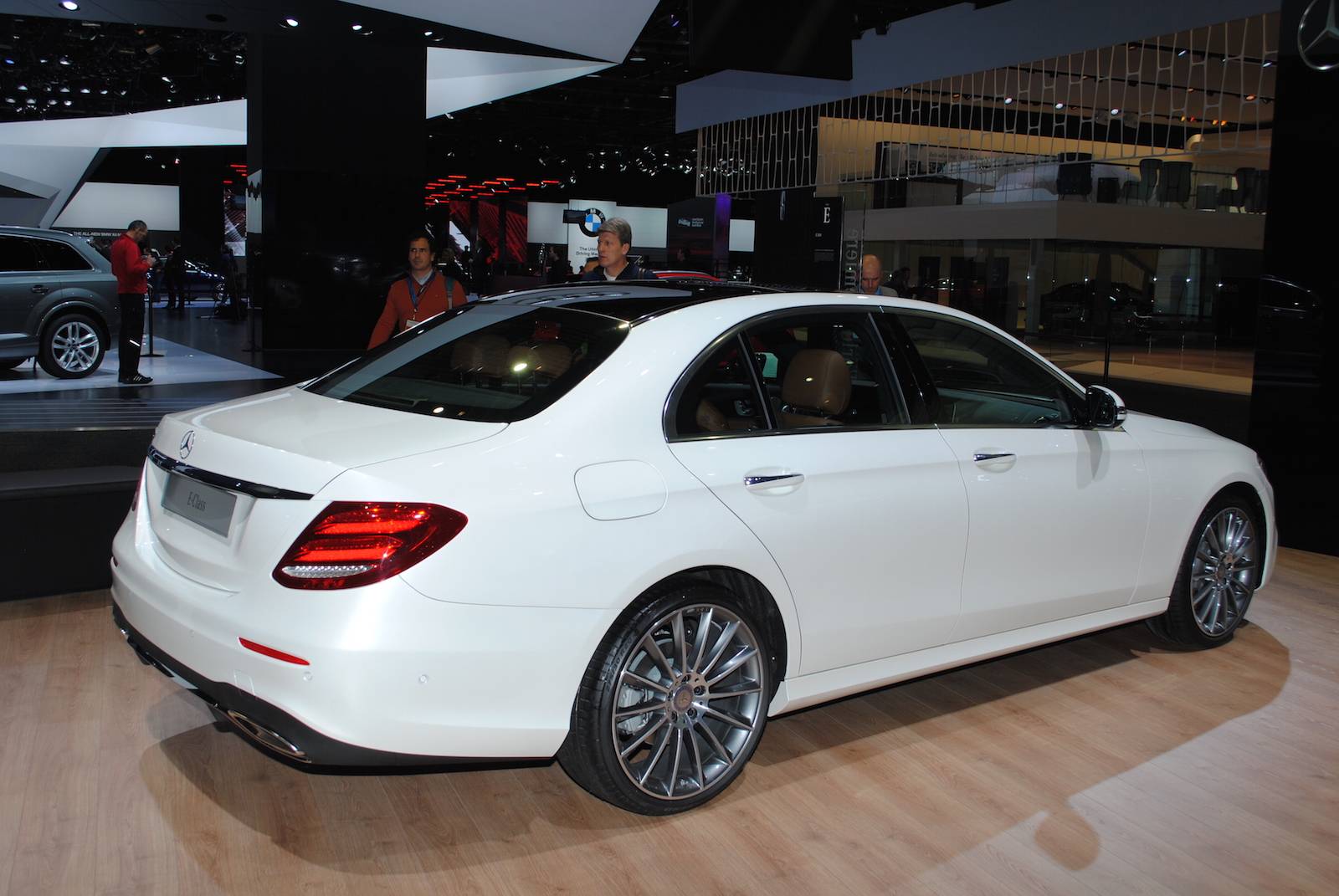 There will also be a petrol-electric hybrid called the E 350 e later in 2016, which has 275bhp and 600Nm of torque. Emissions are impressive at 49 g/km and economy even more so at 134.5 mpg.
Standard kit includes sat-nav, an 8.4-inch screen, parking sensors, autonomous emergency braking, climate control, an LED interior lighting system, heated seats and alloy wheels (17-inch for the 220 d and 18-inch for the 350 d).

AMG Line cars get sportier bumpers and side skirts, bigger alloy wheels, an AMG-branded steering wheel and sports seats. Air suspension and a larger 12.3-inch display are both standard on E 350 d models. 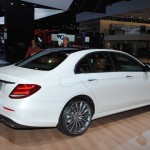 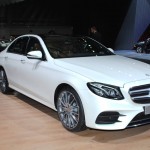 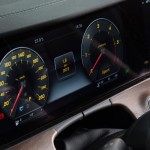 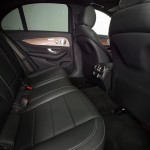 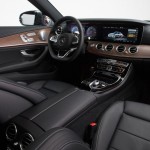 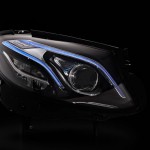 But the new E-Class isn’t all about design and technology quirks. Long criticised for its rattly diesel engines, Mercedes has developed an all-new diesel powertrain, which will feature here for the first time. The E 220d uses a 2.0-litre four-cylinder unit with 192bhp. It’ll do 0-62mph in 7.3 seconds, while giving the best efficiency in class, with CO2 emissions of 102g/km and 72.4mpg economy. The cleanest Jaguar XF, for example, claims 104g/km and 70.6mpg, while BMW’s 5 Series delivers 114g/km and 65.7mpg.

This will be the only UK engine from launch, although a small E 200 2.0-litre petrol will be available in other markets. A larger, more powerful 258bhp E 350d will join the range in the summer, alongside the E 350e plug-in hybrid before the end of the year. The line-up will be completed by a smaller, fleet-friendly diesel at the start of 2017, ahead of a bonkers Mercedes-AMG E 63 in the not-too-distant future.

Some prospective buyers will be disappointed to learn Mercedes is not planning a manual gearbox option for the new E-Class, however. Instead, all cars will come with a new nine-speed 9G-Tronic automatic transmission – similar to that found in the new GLC SUV. It’ll help towards the impressive fuel economy figures, and should ensure superior noise levels at motorway speeds.

All UK cars will come with ‘Comfortable Avantgarde’ suspension, lowered by 15mm for a sportier character.Adaptive ‘multi-chamber’ air-suspension will also be an option, which Mercedes claims is a class first. Comfort, Eco, Sport, Sport+ and Individual modes allow owners to set the car up to suit their driving preferences, although the brand says it offers soft base suspension, but still with good stability and decent handling.

We’d be surprised if the E-Class didn’t at least match the outgoing model for boot space and rear legroom, especially given the stretched wheelbase. If the S-Class is anything to go by, the sloping roofline is unlikely to affect headroom. Like other models in the range, the new E-Class comes loaded with safety kit. Included as standard is Active Brake.

Assist with pedestrian detection as well as Attention Assist to prevent drowsiness. Other systems include speed-limit recognition, with Active Lane-Change Assistant, although these are only available at extra cost.

Drive Pilot is an optional package that Mercedes says represents the next step in autonomous motoring. It allows drivers to follow the car in front at a safe distance, at speeds of up to 130mph. The car can slow to a complete stop, as well as steer round ‘moderate’ bends. It recognises surrounding vehicles, too, and even works when there are no lines in the road. The new technology claims to “see around corners and through obstacles”, by using other drivers’ mobile phone signals and data to warn of imminent danger or congestion.

While speaking at the 2016 Detroit Motor Show, Prof. Dr. Thomas Weber proudly showed off the licence Mercedes had been given by the state of Nevada to test the E-Class autonomously on the road, using tech that exists on the new car.

However, currently autonomous driving mode will only remain active for up to a minute, before receiving confirmation that the driver is still in control. After 30 seconds, audible and visible warnings will remind the driver to hold the steering wheel to accept control. If nothing happens after around a minute, the car will slowly begin what Weber describes as a “controlled shut-down procedure” gently slowing the car in its lane.

Those limitations will be removed for testing in Nevada, which will enable the car to drive in full autonomous mode for longer without intervention.